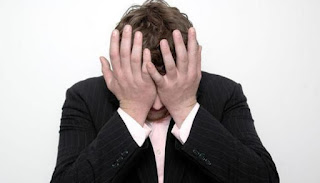 Trevor Hamilton, a data-entry clerk whose contempt for his tedious, completely inessential job has grown into silent yet consuming fury, announced today that he’s not really looking for new work right now.

“I don’t know, I just feel like I’ve settled into a bit of a groove here,” said Hamilton, who typically drinks at least six cups of coffee a day to give himself the energy to complete the repetitive, mind-numbing tasks that make up his work day.

“Plus, the pay isn’t too bad, and the people I work with are fine,” added Hamilton, who makes $15 an hour without benefits and eats by himself in the strip-mall parking lot across from his office so he doesn’t have to listen to his coworkers talk about the weather.

“I also just hate looking for work. It’s such a bummer,” he complained, without mentioning that he dreads getting out of bed to go to work so much that it often feels like an anvil is sitting on his chest when he wakes up.

The 27-year-old Hamilton was first hired at Rutherford Industries five years ago after graduating from university with a B. A. in Anthropology. He had originally intended the job to be a stopgap position until he found something more suited to his background and interests, a goal that never came to fruition.

“I don’t get it,” said Mike Thiessen, a friend of Hamilton’s since high school. “When I talk to him about his job, it’s clear that he hates it, yet every time I send him a link to an employment opportunity I think he’d be interested in, he never follows up on it.”

When told of Thiessen’s comments, Hamilton sighed. “Mike means well, but honestly, he can be a bit overbearing when it comes to telling me what I should be doing with my life,” he replied, neglecting to bring up that he routinely refers to his mode of employment as “my stupid fucking job.”

Hamilton, whose daily commute is marked by a mood of oppressive, suffocating gloom, claimed that his job “wasn’t ideal, maybe, but it’s, you know, fine. I just don’t see why I should just uproot my life and go through that kind of major change.”

At press time, Hamilton was standing in the office bathroom, staring into the mirror and swearing just out of earshot of anyone walking past outside.

Posted by Darren Springer at 09:12